The 1st edition of the GéoMécanique newsletter is brought to you by Chao Yuan. It contains the latest news regarding research publications, conference visits and other activities of the staff and students from the GéoMécanique group of Laboratoire 3SR (Sols, Solides, Structures – Risques). If you have something you want to share, please don’t hesitate to contact us at: geomecanique.newsletter@3sr-grenoble.fr. Please feel free to forward the letter to colleagues and friends, and let them know that they can subscribe by themselves here. Enjoy.

A new research group at 3SR lab, The word of our team leader Gaël Combe

The GeoMechanics group of Grenoble gathers all researchers working on the mechanics of soils and rocks at 3SR lab. The group has been created late 2014. It has 50 members, including 15 permanent researchers. The group’s ambition is to combine the expertises of everyone in order to integrate all aspects of research in geomechanics, from theory to experiments and simulations, and from fundamental to engineering sciences.

This idea of this newsletter is directly inspired by the monthly newsletter of the Hydrology Group at Utrecht University.

The paper “Microscopic origins of shear stress in dense fluid-grain mixtures” by Donia Marzougui, Bruno Chareyre and Julien Chauchat has been accepted for publication in Granular Matter (in press).

An abstract “Multi-resolution characterisation of grain-based measurements from x-ray tomography” has been accepted for the ICTMS2015 conference in Quebec. The authors are E. Andò, A. Tengattini, M. Wiebicke, G. Viggiani and S. Salager.

Interpore 2015: the following abstacts have been accepted for the Intepore meeting 2015 in Padova:

The research project funded by the consortium NEEDS MiPor and headed by Pierre Bésuelle has been extended for 2015. The project concerns the experimental multiscale characterization of deformation processes under mechanical and hydric loadings in the Callovo-Oxfordian claystone.

Cino and Eddy are just back from Athens, discussing with Yannis Dafalias’ group about the SOMEF project, which involves a number of in-situ triaxial x-ray experiments in order to measure the evolution of fabric (grain-to-grain contacts orientations, grain orientations and void orientations) during a test. This work also involves the PhD of Max Wiebicke and the Masters student Erminio Salvatore, who is developing a triaxial extension device.

3SR lab. is a partner of the GEO-RAMP project starting in April 2015. GEO-RAMP is funded by the European Union in the framework of Marie Skłodowska-Curie Research and Innovation Staff Exchange (RISE) programme, and coordinated by Stefano Utili (Warwick University, UK). Thank to this project staff exchanges will be implemented during the next four years with Georgia Tech (US), the Universities of San Juan (Argentina) and San Simon (Bolivia), and Tongji University (China).

Ing. Hamid Hosseini (Payam) Sabradi joined our group for a PhD on “In-situ assessment of the sensitivity to liquefaction by the vibro-CPT technique”. This research is part of a 3-year project funded by Equaterre (Annecy, France), the work is supervised by Bruno Chareyre and Luc Sibille. It will combine numerical modeling (hydromechanical coupling DEM-PFV) with lab and full scale experiments.

Following a visit of Yosuke Higo, an associate Professor in Kyoto University, for 6 months in our lab (partially supported by TEC 21 short duration visitor grant), a group of our team has been invited for one week, by our Japanese colleague, to give seminars in several places in Japan. During this one week trip, Jacques Desrues, Ghonwa Khaddour and Simon Salager made talks in Kyoto University, in Tokyo (TEC105) and finally in Tsukuba University. The presented subjects was about: unsaturated sand behavior of sand analyzed from x-ray tomography, experimental characterization of clay rock behavior in strain localized regime and double scales modelling where our FEM2 and DEMxFEM models were presented. This Japanese visit was scientifically fruitful and the future of the collaboration with Kyoto University is already guarantee by co-management of a post-doc that will start in our lab next September (funded by TEC21). 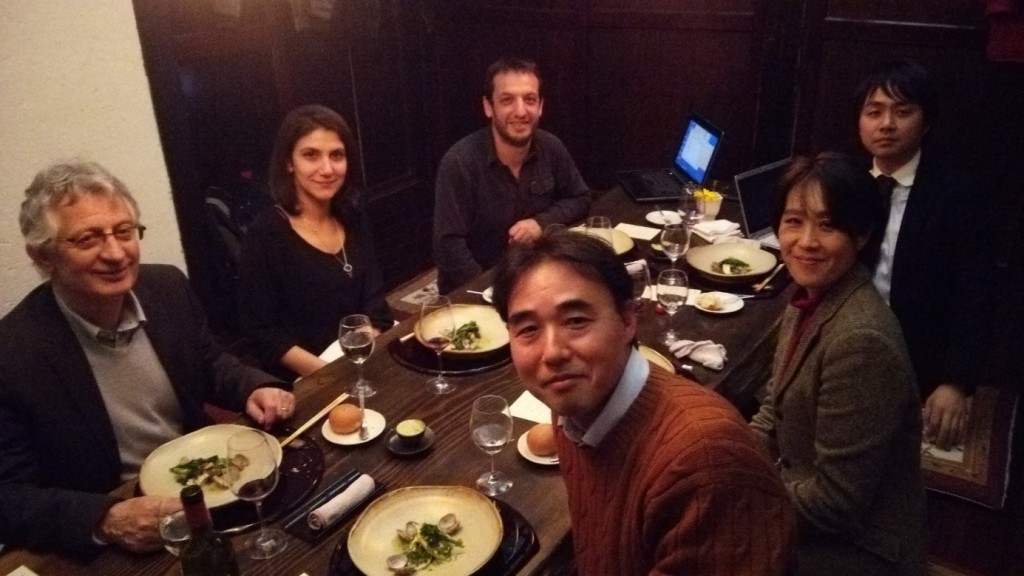 Eddy is recently back from a Visit to Stephen Hall and Erika Tudisco (both previously in 3SR and now both in in Lund, Sweden). He worked on TomoWarp2, the python-based 3D image-correlation program, which now has a graphical user interface, and a large number of automatically-set parameters.

Alexandra Tsopela, Marcello Teixeira, Frederic Donzé and Timos Papachristos will be in Pau the following week for an internal wokshop hosted by Total. During the workshop, the hydraulic fracture modelling team from Grenoble will share the advances of the ongoing work and discuss with the other teams involved in the project (UPPA, Univ.Lille, Stanford, MIT).

Félix Darve is leaving on next saturday 28th of march for a congress in Montreal in the framework of a french delegation of around 30 persons, organised by INDURA (regional CLUSTER “INfrastructures DUrables Rhône-Alpes). The congress (3 days of duration) is organised by AQTr (Association Québecoise des Transports) and is gathering more than 1000 participants. The french SNCF is participating with 4 delegates. “My idea is to try to contact the canadian railways, who are in charge of the construction of very long railway lines in the north of Canada”, he said. “These lines will be subjected to permafrost melting in some places, due to the strong climatic change in these regions (even if it is particularly cold presently in Montreal !!!). We know today that, in the Alps, permafrost melting is also now a new source of difficulties with respect to the stability/settlement of constructions at high altitude with some ice lentils detected below the foundations. Thus some researches of common interest might be defined ….”

Ghonwa Khaddour, Rodaina Aboul Hosn, Félix Darve and Luc Sibille, participated in the workshop organized by the lab. LMGC at Montpellier in the framework of the national research group MeGe, about capillarity, cementation, and erosion in granular media. They present new advances performed in 3SR concerning discrete analyses of both water phase evolution within an unsaturated soil, and transport of eroded soil particles.

This entry was posted in newsletter. Bookmark the permalink.